D&D 5e and Lost Mine of Phandelver - initial thoughts

I regularly play LotFP, but a couple of months ago my friend asked if we could play something easier. He had experience with Dungeons and Dragons 3.5 from years ago, when we played at an apartment much larger than the efficiency I currently live in. I was a pretty lame DM, doing my best to re-adjust "balanced" material for our party of three. I got pretty lost without adventure books and maps and miniatures. At that time, I had a little bit of stuff from when I started in 2e, but it seemed so mysterious; I was too shy to seek someone to explain it to me, and too lazy to make sense of it on my own. When I remember our early games I can hardly pick out "awesome gamer moments" like most people have. As a result, when my asked me for an easier game, my mind immediately shot to Dungeons and Dragons 5th edition, and painful memories of the system it more-or-less owes its skeleton to.

Fourth edition was immediately out of consideration; He and his wife had played, and so had my wife, and I had DM'ed 4e for several years. Although I had recently nabbed an excellent deal on some of the essentials books, I can't shake the feeling that the system is cumbersome without paying for the use of digital tools. I also had no desire to moderate so many board game-isms, and be forced to home brew a wagon-load of extra rules to make it fun for me. Something new would be better. But...

My first experience with 5e was a bad one. I play public games at a store fairly often and as a result you occasionally encounter that guy. I can deal with that guy... in fact part of my job is dealing with that guy on a regular basis. My wife, however, gets a whole different sort of creepy attention from that guy. So, when I put it out there that I'd be running Horde of the Dragon Queen, that guy pops up, and my wife says "fuck it, I'm staying home." I imagine she's not the only one. This probably colored my perception of the game ahead, which I can only recall as being utterly bland, Them VS. Us, generic combat fantasy. That guy wasn't even that bad in the end, but playing whackamole with kobolds for the thousandth time didn't make me want to continue. That guy wanted me to run the entire adventure but I was firm that I wasn't going any farther than a one-shot with this.

Nonetheless there is no way in hell I want to continue on with the mess that is 3.5 either; Not for a player which wants easier mechanics with less character death. The very-customizable skill and feat system is great for players who want complicated characters and complicated play. We are getting back to basics, trying to relearn and expand on dungeon crawl game skills that almost seem expected in games like Lamentations. Fifth edition seems like (and is) a good fit for our friends for that purpose, and it caters well to the casual atmosphere. Instead of picking up HotDQ again (by this point, plenty of reviews are available telling you why this adventure kinda sucks) I cracked open the Lost Mine of Phandelver because people are referring to it as the "Gold Standard."

So, over the course of many weekly sessions, we've finally beaten the Lost Mine of Phandelver. The entire adventure was not a flop like my early DM'ing efforts. The players had fun, and we all met up pretty religiously to continue playing. My past gaming sins feel redeemed. My thoughts on 5e have changed, as a result, pretty dramatically. It is not my favorite game system... Lamentations still takes the cake for that. Here are my current thoughts, though.

- Some people have talked about the simplicity of everything relying off of your six stats. It's true. It's super intuitive and allows for players to easily grasp what they're doing.
- Multi-classing is super easy.
- Death is virtually non-existent provided the adversaries aren't purposefully performing a Coup-De-Grace on every fallen combatant.
-  What seems like "weak characters" at 1st-2nd level are immediately made stronger within a session or two; which is a nice change of pace for players who don't want character death.
- There's pretty much no need for healers
- The books and layout are very pretty and evocative of the type of game you'd hope to be playing in 2015
- Has social skills (Persuasion, Deception, Intimidation, formerly known as bluff, diplomacy, etc.) that let you roll dice for things other than combat
- Your players are still rolling more dice for combat than anything else, and rolling dice is fun, so guess what they want to do more often than not?

If you haven't played Lost Mine of Phandelver and are sensitive to SPOILERS, avoid reading below. 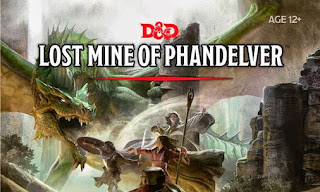 Lost Mine of Phandelver is an adventure that comes in the D&D starter set and it will inevitably shape the way that people think 5th edition is played. It took our party of 3 players from level 1 to level 4 by the time they had finished it. It's not narrow in scope and teaches a newer style of D&D game very well, while blending in elements from the oldest of D&D games.

My first gripe about this adventure is the hook. The adventure assumes that these characters of multiple backgrounds will all be in the same place at the same time, all know the same guy, and let him leave by himself with no accompaniment in an area that's well known to be a dangerous frontier. Don't like that hook? Well, straight from the book, "You can let the players invent their own reasons for visiting Phandalin," aka passing the buck.

An adventure hook is a lot like a song hook, it's there to get you excited and engaged in the material. This might as well be a big hand-wave of a reason to get your party together and on the road. Me? Well, I invented a villain to take care of the hook. The PCs all have something in common -- they were all drugged and kidnapped, waking up inside wooden coffins that are nailed shut. They got to break out of these to discover that they're on a muddy road post-goblin ambush, leading to the first encounter in the module. In a style typical of the SAW movies, there are a few other people that have been kidnapped as well, including the villain, playing dumb amongst them.

What proceeds is a goblin whackamole cave, then you travel to Phandalin. This part of the adventure is actually pretty cool and innovative -- it describes a lot of places, some of them giving you quests, others even giving you quest chains, very similar to Skyrim. Most people here hate the local thugs. The PCs took up some side jobs killing Orcs far away, then took care of the thugs. There is a very interesting point-crawl portion of this as well. The sandbox travelling rules are about as simple as Mentzer D&D, although the map is much more sparse. Fun fact: It's pretty much the same map from the 4e Neverwinter stuff, plus or minus a few locations. The point-based encounters are pretty typical stuff you'd see in the Baldur's Gate PC game. Everything in-between the points is pretty much empty and boring, including the random encounters.

Eventually the PCs have to sit out in the woods and wait for some goblins to appear so they can follow them to a larger hideout, which is also a boring moment. That leads the party to goblin whackamole castle, which has a pretty sweet Doppelganger that the book tells you more-or-less to keep alive to make him a more interesting villain later. He didn't have much of an opportunity, the PCs smashed his skull in pretty fast.

The end results in the PCs getting sent to an old mine that is actually pretty close to town. Some big fancy things have been rumored to be here at this point, like the "Forge of Spells" and this mysterious villain named "The Black Spider." Well, hate to break it to ya, but The Black Spider is in a pretty bad spot of the cave tactically, and will probably be outmaneuvered by the PCs, who can also choke off his little warband in the hallway and take care of them. His giant spider minions will make the players sweat as their HP drops quickly, but once they're done he's some little mage dude with 24 hit points who gets absolutely crushed in 2 PC turns. The result is pretty anti-climactic.

But wait! He only controlled about half of the dungeon, and the PCs have been booked to clear the whole thing and get it running. Plus there's that Forge of Spells. Well, turns out the Forge of Spells is nothing but a tiny green flame now, which can turn your weapon into a +1 weapon for 1 minute. (WHAT?!) Also, the loot is here, 2 fairly generic +1 magic items with a couple of extra properties.

There's a mini-beholder here called a Spectator, and he's a chump as well. The eye-beams are pretty weak, his bite equally more so, and about two rounds of combat ended him. The whispering wraith to the south of him makes for a pretty freakin' dangerous encounter, but not after the party picks up a +1 weapon, has the forge of spells within walking distance, and has already collected enough treasure to silver a weapon or two. There is a cool opportunity to talk to him instead, or bargain with him, or to not steal his shit to begin with. (Does it really belong to him anymore if he's technically dead?)

The true threat to exploration in this dungeon lies in the middle, where there's eight zombies and a floating flameskull that knows Fireball and some other pretty damaging spells. That's about the only part of the dungeon that's really satisfying in its concept, too; That thing does some serious damage to the PCs so it's understood why the Black Spider never really made it over to the other side of the dungeon. It's the toughest encounter here by far.

Your reward for going through all of this is TEN PERCENT of the wealth extracted from the mine. Your other reward? Having the book not tell you how much that is, or how to proceed with the game from here, now that your PCs have a fucking mine. I actually don't have a personal problem with this; I have tons of ideas of where to go, but I really feel for the "Starter Set" purchaser who has to tackle this sort of thing at the end of an (otherwise easy) first foray into D&D.

Phandelver gives you a lot of opportunity for copying its format and making your own towns, or point crawls with random encounter tables. All of it is pretty generic but still fresh enough to be fun. As a starter product, I think it opens the door for the imagination, but it doesn't do a good job of explaining to a new DM how important the DIY ethos will be in his/her campaign going forward. To use an old metaphor, if you want to eat a fish, go for Lost Mine of Phandelver, it's a good fish; If you want to learn how to fish, you should probably pick up Frank Mentzer's 1981 Dungeons and Dragons, aka BECMI. Those Red and Blue books will teach you everything you'll ever need to know about creating dungeons and outdoor environments just like the ones in this adventure.
Posted by Ed Vaughan at 6:54 AM