D&D is best played as a score attack game 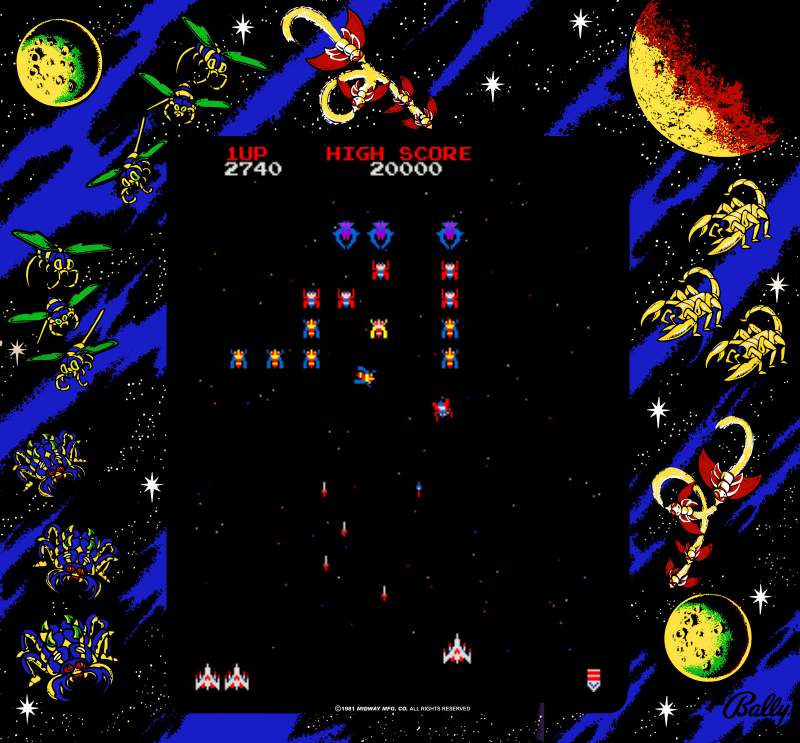 Let me start by saying that I do not think TSR ever intended D&D to be a score attack game as we know them today. Space Invaders released in 1978, Galaxian in 1979, and Galaga (pictured above) in 1981. These games all featured a gameplay loop focused on getting your score on an electronic leaderboard. In digging a bit, Gary Gygax states in Dragon Magazine -

Dave had taken the man-to-man and fantasy mles and modified them for his campaign. Players began as Heroes or Wizards. With sufficient success they could become Superheroes. In a similar fashion, Wizards could become more powerful. Additionally, he had added equipment for players to purchase and expanded the characters descriptions considerably — even adding several new monsters to the rather short CHAINMAIL line-up.
The idea of measured progression (experience points) and the addition of games taking place in a dungeon maze struck me as being very desireable. However, that did not really fit in the framework of CHAINMAIL. I asked Dave to please send me his rules additions, for I thought a whole new system should be developed. A few weeks after his visit I received 18 or so handwritten pages of rules and notes pertaining to his campaign, and I immediately began work on a brand new manuscript. - Dragon Magazine Issue #7

Thinking in miniature wargaming terms, Gary just wanted to promote his normal soldiers into sergeants, commanders, and eventually superheroes. The experience points were more of a means to an end. I think many D&D players agree, and you see game design over the editions shift towards smaller amounts of experience to level, and the explicit permission to do "milestone leveling" -- that is, hand-waving experience altogether and letting the Referee decide when you level up. Experience points and leveling are the main gameplay loop in Dungeon games. They are the carrot dangling before the player, and provide the same dopamine hits as taking a spot on the glowing digital leaderboard at your local arcade.

I'd like to advocate for the opposite of milestone leveling for Dungeon game characters. The hard-fought grind to greatness present in early games, if you forced yourself to follow the rules closely. The early gameplay loop of allowing experience to be gained through treasure as well as monster encounters. But also, more. Experience is a motivator. It is a reward for players taking the appropriate interactions that the system determines. It should probably more properly represent what the character is gaining, though -- experience. Here are the XP rules I'm using*.

“Player Character” - the character is played for the game session: Gain 250 XP.
Character enters a dangerous and/or unknown area (i.e. the Dungeon): Gain 50 XP, up to once per game day
Character maps a dangerous and/or unknown area: Gain 10 XP, plus an additional 10 XP for every room mapped prior to it during the game session.
Successfully dealing damage to an opponent, successfully casting a spell, making any successful or unsuccessful skill check (except for Language & Lore), any saving throw roll: Gain XP equal to the die roll.
Character takes hit point damage from an opponent or hazard: Gain XP equal to five times the hit points lost.
Possessing a target**: Gain 100 XP
Dangerous Encounters: Gain XP equal to ten times the opponent’s level for surviving an encounter through combat, wit, evasion or other means.
Treasure: Gain XP equal to the amount of treasure you have gained at the end of a session, including from rewards and treasures sold.

In short: players track their rolls, add them up on scrap paper throughout the session, and gain XP accordingly. Reward them for interacting with all of the game systems. (note -- the above assumes you are playing a system that takes around 2000 XP to get to level 2.) Just like in Galaga, racking up a score and surviving is an accomplishment in itself. Combine this with organized play and maybe have character leaderboards on the internet!

I don't think this style of play is right for every TTRPG. I think it works best with Dungeon games, and in particular, games where the PCs return to a safe zone at the end, allowing the characters to have logical conclusions to walk off into other Referee's games if they wish (such as Flailsnails or West Marches play.) It also probably suits people who like selecting hardcore mode in a game like Diablo.

Let's be real, I'm still playing OSR games, our PCs rarely get above level 2 before making a bad judgement call and biting the dust.

*Yeah we're 6200 words into the "heartbreaker" now
**PCs who are knocked out in our game can become ghosts who can attempt to influence the living world, including attempting to possess the living

Hey! If you've read this far, and especially if you've read multiple posts, thanks a ton, and I hope you have a great day.

Convert your purple box to LotFP!

The 2nd version of the Dark Sun conversion packet for LotFP is finished! You can get it here: https://drive.google.com/file/d/0B_q5Tn4Vi...